This past week, I was lucky enough to be able to attend the 2nd annual Kentico Connection conference in Denver, Colorado. The conference served as a stage for Kentico to release the newest version of it’s software, as well as, provide a place for the members of the Kentico community to meet up and discuss all things CMS. Kentico bills it as the the place where developers, marketers and business connect.

I have only been to a few other conferences of this type, but this one easily rises to the top of my list. Every aspect of the conference was excellent.

As I mentioned above, we spent 3 wonderful days in Denver. The Kentico Connection conference specifically took place at the Inverness Hotel, and that is also where the two of us from BizStream stayed. It was an excellent place to stage a conference of this size. The hotel staff were very pleasant to deal with, and all the rooms were very clean.

The various sessions and meetings used the main auditorium, as well as, multiple medium and small sized conference rooms. The layout of the hotel made it easy to figure out where to go for each activity.

The two or three onsite bars didn’t hurt either. In fact if you ever find yourself at the Inverness, I highly recommend the Spotted Dog Pub on the ground level. Did I mention that the food was excellent too? 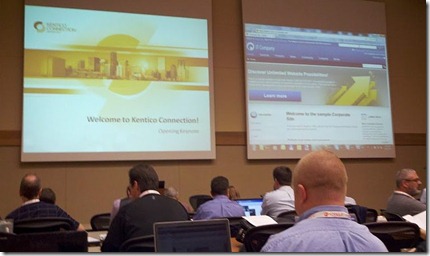 The opening keynote was given by the founder of Kentico, Petr Palas. Petr spoke on the details of how major a release the 6.0 release is. He also officially introduced the Kentico Enterprise Marketing Solution (EMS) as a whole new product designed for marketers who require an integrated customer experience management (CXM) solution. A follow up blog post is coming on Kentico EMS.

Janus Boye spoke during the keynote as well. Janus is an industry leader and analyst in the Web Content Management field. He gave a great speech on keeping content management simple to solve real world problems. He also had the crowd amused with his references to Indiana Jones and the Last Crusade as the theme for his talk.

The conference itself was divided into two tracks. The Technology track focused on detailing the improvements targeted towards Developers and Administrators of Kentico CMS. The second track focuses on Business, with it’s focus being targeted towards website owners, and web marketers.

I choose to be a part of the technology tracks mainly. Some of the sessions I caught included, “Building High Scalable Websites”, “Lap around High Availability and Scalability”, “From the desk of the CTO: Kentico CMS 6”. All of these tracks were very good. Each presenter just happened to be a Kentico employee, so we got real solid information on each of the topics.

The one business track that I did catch was “Running in the Windows Azure Cloud”. Vince Mayfield and Bryan Soltis from Bit-Wizards did a great job on this one. They went over the business case for why Azure makes sense for a Website Owner or IT Manager to deploy to the cloud. It really is impressive that Kentico CMS was the first ASP.Net based CMS to run fully within Windows Azure natively.

Below is a screenshot of the first slide in Thom Robbins’ presentation, “What’s new for Web Developers in Kentico CMS 6.0”.

I know it’s a little hard to read the picture above, but if you can, yes you read it right. This humble little blog got a little recognition. That quote is from my post on the Top 5 New Features for Developers in Kentico CMS 6.0. That was pretty cool.

One of the benefits that conference attendees received was an hour of time with the Kentico staff member of the attendees choice. I got to spend my session with Karol Jarkovsky. We discussed some high performance settings when using Kentico on larger sites, and also talked a little about various IIS tweaks to improve page load time. I saw many attendees take advantage of this.

We also reviewed some of the sites that BizStream has implemented. It was pretty cool to talk over some of the issues that we have had with creating sites to people who have actually worked on the product.

All and all I would say that over 150 people attended the conference. The attendees consisted of both customers and partners. I talked to many of them and there was almost a unanimous feeling of positivity about the conference and the software itself.

My favorite part of the conference was meeting some really great people that also happened to be Kentico CMS Solution, Training, and/or Hosting partners. I talked with many of the top Kentico Solutions Partners across the US and even the world, including representatives from Blue Modus, Get Started, 5Nova, Sedona, Bit Wizards, r42 Communications, and Adaptdev. All great companies and people. It’s too bad there wasn’t more downtime, I would have liked to meet even more of them. Although I will admit we did do our share of socializing.

Another interesting aspect of the community is that Microsoft is actually taking a very strong interest in the Kentico ecosystem as a whole. Gavin Warrener, a Senior Business Development Manager at Microsoft, gave a nice short session on why they believe in the platform and look to support it as much as they can. Petr Palas described it as Microsoft having a love affair with Kentico, and that got quite the laugh out of the crowd.

Roadmap of the Product’s Future

The closing speech from Petr Palas included some nice previews of things to come. Peter laid out some high level goals for Kentico 7.0 and beyond. Let’s just say that there is some really useful integration coming.

Surprisingly Kentico CMS 7.0 is slated for the first half of 2012.

End of the Day

When it comes to software conferences, training sessions, or webinars in general, most people want to know one thing; Was the time I spent on this worth it?

In my opinion the Kentico Connection conference was completely worth it. I feel like I gained knowledge on the new release of the software, met some knowledgeable insiders, and learned where the software is going in the future. I would totally recommend to anyone using or interested in Kentico CMS to signup for next year’s conference.