It's hard to believe that I am sitting here, on Christmas day, the temperature outside is above freezing, and there is no snow on the ground. A green Christmas just really isn't the same as a white one I guess. However, now that all the presents are open, stockings unhung, and my girls are happily playing with their new toys, I have some rare free time to reflect on what happened this year.

It is only fitting to start with the biggest news of the year and that would be the release of Kentico 8.0. This year's major point release was a huge success. The newly redesigned user interface and reduced footprint made developers and marketers quite happy. The product has never been easier to use. Not stopping with just a single release in the year Kentico also pushed out a minor point update to 8.1. This update included a few performance upgrades and a small set of new functionality. As a result Kentico 8.0 and Kentico 8.1 topics dominated the developer community blogs, podcasts, and questions on DevNet.

2014 turned out to be another great year for myself and the entire Kentico community. I was again recognized as a Kentico MVP, for which I am still truly honored to have as a title. We also added a new member to the MVP ranks, Ilesh Mistry. Jeroen even had time to redesign his Kentico blog. The number of certified Kentico developers grew overall as well. I am very excited to see the developer community to continue to strengthen its size and knowledge.

There were three major Kentico Connection conferences this year spread out across the globe. Sydney came first, followed by Prague, and finally Boston. I was lucky enough to attend and speak at two of them, although I will admit, not as lucky as Bryan Soltis because he was able to attend all three of them. Each conference was excellent opportunity to learn more about Kentico, celebrate the company's 10th birthday, and discuss the future of software with some great people. The Prague conference was truly special for me because I was able to take a few extra days after the conference and work directly at the Brno headquarters of Kentico.

Kentico's marketing team was empowered this year too. The partner portal was redesigned and is a welcome improvement. The company officially updated its logo to be cleaner and sleeker. A new demo site is about to be released. DevNet got a facelift. The list goes on and on.

My blog here at Mcbeev.com mirrored the success that Kentico had this year. Overall pageviews were up by 13%, overall sessions increased by 25%, and the site's visitor's average time on page increased when compared to 2013 as well. I was also happy to exceed my goal of posting at least once or twice a month as well. My social channels saw a good increase as well, with Twitter being the big winner. My number of followers increased by 64% in 2014. Not bad at all.

However, this isn't going to be a very good Top 10 list if I don't get on with it. Keep reading to find out which posts made it to my Top 10 Kentico related posts of 2014 according to the amount of traffic that they generated.

1. 8 Updates Coming in Kentico EMS 8 - my first preview of Kentico 8.0 and what to expect from the on-line marketing solution.

2. Speed Up Your Kentico Debugging in Visual Studio - this is an interesting result to make it to #2 because it is a more recent post. Developers can use this trick to debug faster for a website project type.

3. First Impressions on Kentico 8.1 - this post making it to the top 10 is not that surprising because 8.1 is currently the most popular build. I review all of the new features in 8.1.

4. Kentico CMS Quick Tip: Scheduled Task Execution Troubleshooting - helpful tips on what to check if your scheduled tasks are not running.

5. 5 Dead Simple Kentico A/B Tests for Website Optimization - funny how this was the fifth most popular post of the year since it starts with the number 5. I wonder if I should have A/B tested the title ?

6. 2 Under the Radar Kentico 8 E-commerce Improvements - being able to control the checkout process and being mobile friendly out of the box is a killer Kentico 8 feature.

7. Zoho CRM Module for Kentico 8 - This one may not have reached the top of the popularity contents, but this is the blog post that I am the most proud of this year. I can say so because it comes with a full Kentico 8 module that I feel represents some pretty good work. Plus, module development in Kentico 8 is outstandingly fun.

10. Registering Custom Classes in Kentico 8 Has Never Been Easier - a simple but amazing difference to registering custom event handlers, functions, and custom code. Important to know if you are a Kentico developer.

Back in 2013 I predicted that it would be hard to top that year. I think it is safe to say that 2014 succeeded in doing so. What does that mean for 2015? Well it is hard to say but Kentico 8.2 comes out on January 6th, 2015, so I would say that is a pretty good start. If you liked this post I would encourage you to check out Kentico's own reflection of the year, as well as Ilesh's Top 10 Kentico Posts. I will leave you with my favorite picture of the year. Thanks for reading and happy holidays! 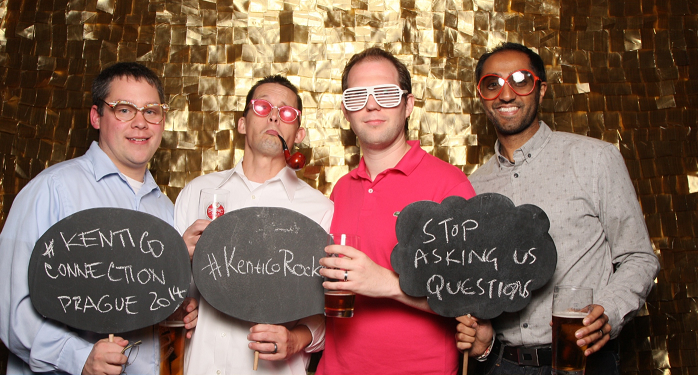