This post continues my series on the new features of Kentico CMS 6.0. Today I am targeting website administrators and Kentico site administrators as one audience. Mostly though it’s the group of people in the trenches, or in our case network closets, normally tasked with installing the occasional SSL certificate or making sure the servers aren’t on fire.

The release of Kentico CMS 6.0 brings some much needed love to this area of installing, maintaining, and monitoring an instance or multiple instances of the Kentico product. Let’s dive in.

The new Health Monitoring feature of Kentico CMS 6.0 should make server administrators drool. Perfmon is pretty much the tool of choice when it comes to debugging any performance issue on a Windows based server. Now with this feature installed you can track and measure all sorts of important Kentico related metrics. 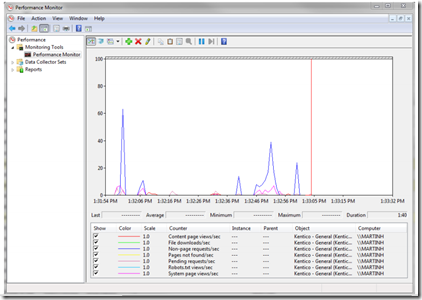 6.0 adds two major counters that apply to the running instance of Kentico on the server in question. The first is the global level of the product, aptly named Kentico – General. It adds counters for top level objects and settings, think of it as the CMSSiteMananger related counter group.

The second counter is for site level metrics named, Kentico – Sites. This counter group allows you to add variables related to the specific site you want to monitor. The majority of the list is in the screenshot below. 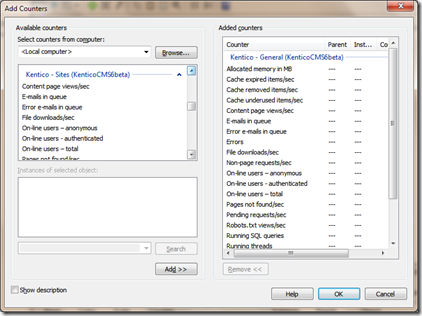 Having this level of visibility into your system is extremely valuable, especially if it is a large installations. Instead of looking through the event log to figure out what is going on you might want to start looking here.

The biggest single complaint that my team has had with moving sites and objects around from server to server on the Kentico platform is the site import / export functionality of the 5.x version of Kentico CMS. Sometimes they just need to remember the right checkboxes to check or un-check, but that’s a different blog post. Overall the biggest complaint is that on very large sites it just takes too long and times out.

In the new release, the Export / Import functionality has been upgraded. The entire process has been optimized to run faster, as well as, the GUI to export or import individual objects has been improved by adding paging. 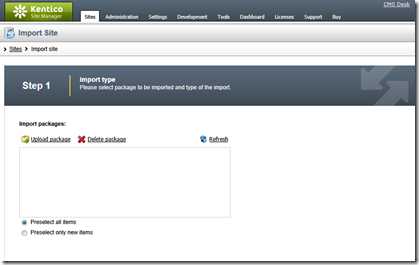 The best improvement though is the ability to directly upload your package to the server. Before you had to manually transfer the file up the the CMSSiteUtils/Import folder before the import wizard would pick up the file. This is a huge timesaver in my opinion.

Users of the excellent Content Staging module will also now be able to Content Sync any newly imported changes from server to server. Prior to this release, it was not at all possible to sync imported objects automatically. A side note here, if you have a development and live server for your Kentico site and don’t utilize Content Staging, you should, it is flat out the best method to keep two instances of Kentico in sync.

This one I almost placed under the Content Editors post, but I think it makes more sense here as a new feature targeted towards Site Administrators.

The Improved Membership feature takes the existing Membership capabilities and extends them with the following:

The Membership concept is explained as a grouping of roles that a user can be assigned with or buy. Membership is generally tied to Ecommerce sites. 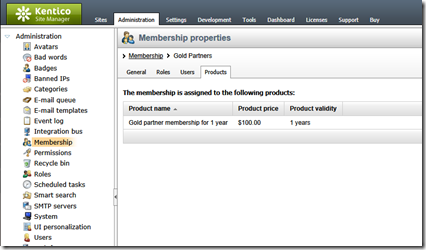 Global roles allow a user to be in a role that crosses sites. Again most useful in the multiple site installation in a single instance of Kentico.

Time limited Roles are intended to be connected to some of the Ecommerce options in Kentico. You could add one of the new product types that add the end of the day, after they make an order,  adds the customer to be a paid member of the site. One nice addition of this feature is that there is also an automatic notification feature, that can alert users when their membership is about to expire via email.

The permission report should be useful for any level of Kentico administrator. Before you could not explicitly see the exact user’s permissions, you always had to mentally translate it to a role.

Kentico has a few processes that run behind the scenes to keep things clean like removing expired shopping cart or automatically process web analytics logs or even to simply process the email queue. All of these things can run at the site level or at the global level if you are running multiple sites in a single instance of the product.

Now with 6.0 those automated tasks can be broken out of the same process that runs the website and into a normal process that runs at the OS level via a service. Doing so provides better availability to the web application. 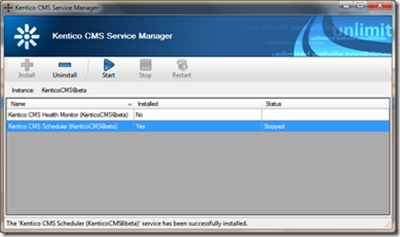 If you have run any large Kentico sites that utilize anything like the Smart Search module of Kentico, then you know having the ability to break out long running tasks out of the w3wp process is a good thing. That way teach task can finish running without worrying about the website’s application pool recycling mid way through. 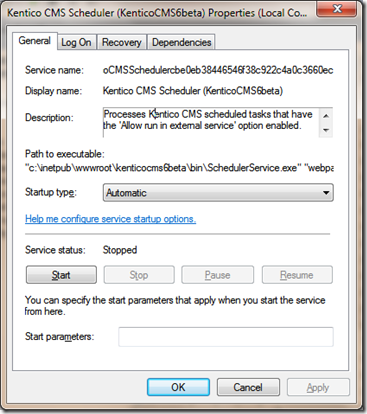 It may seem like a small thing to gracefully shutdown a site. However, anytime there is more than a handful of editors using a tool such as Kentico to edit content on a website, there is always a challenge with scheduling outages to perform maintenance or upgrades.

The ASP.Net framework has always respected the low level way of taking a website offline by placing an app_offline.html file in the root directory. But adding and removing a file is sometimes a pain when the server is in a production mode, plus there was always a bug with that method that the file needed to be more than just a couple bytes in size (512 bytes actually) otherwise the server would respond with a 404 not found response.

Version 6.0 introduces a nice graceful method of taking a site offline without an incorrect 404 response. 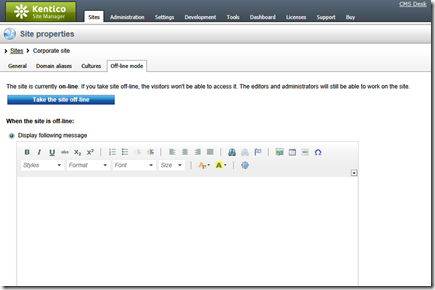 There is actually a second option to redirect the visitor to a whole different URL as well.

I was actually hoping there would be a way to take down multiple sites at once if you are using multiple sites in a single instance of Kentico, but that feature didn’t make the cut. That might be a good idea for a custom scheduled task…

Once again the new version of Kentico adds some beneficial features for Site Administrators. This group of new features should make administrators lives a little bit easier.

I’m hoping to get to the next and last post of this series in the next day or so because this weekend I will be heading out the Kentico Connections 2011. And after that, 6.0 should be released to the masses and I will be busy upgrading all of our client's sites.