In the second part of the series, I am going to continue on with the reasons why Kentico Upgrades take what they take and answer the $64,000 question as to what should an upgrade take for a Kentico MVC Site. Be sure to read part one first of the this two part mini blog post series about Why a Kentico MVC Upgrade Should Not be One Hour before continuing on.

Not Done Until It Says So

Since the Kentico admin tool is the core of the platform, we need to ensure an upgrade is done perfectly. Even though Travel Rock Stars might not be using a ton of Kentico features right now in the current state, they might in the future use many features like Marketing Automation and Content Personalization. This means Kentico still needs to work correctly as well as the live site. We would hate to have the upgrade go "ok", but not perfectly, and 6 months down the road when Travel Rock Stars goes to use Marketing Automation features, something comes up and says error, this is the 11.0 version of the Marketing Automation trigger on a 12 install (just a high-level example). So again, it is more on testing out Kentico as a whole part, after the upgrade and hotfix.

Remember after each major upgrade 10 -> 11 -> 12 you MUST run the solution one time to ensure the Run Once package successfully executes. If you don’t see a message that says upgrade completed successfully you should not go any further, and might need to restart that step of the upgrade. 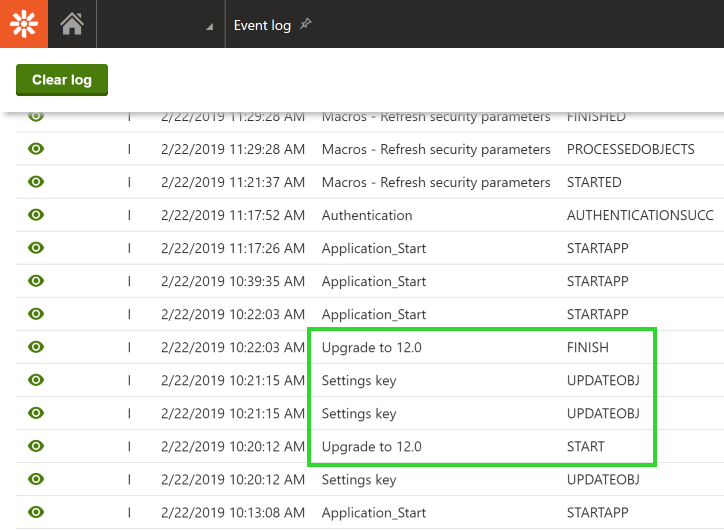 Don’t forget the post upgrade steps in the instructions either! It is important to re-sign the macros and do the other things the steps mention.

Differences Between a Full Upgrade and a Hotfix

Even though both types updates share the same type of process (basically a SQL script and code update), they are not really that alike. A Kentico Upgrade consists of major updates to the product that have spanned a year's worth of work from multiple developers and engineers over at Kentico (and sometimes more time than that). The upgrades typically include new features, entire code re-writes of specific features, compilation optimizations under the hood, removal of features, and most importantly major Kentico API updates happen.

That last part is the one that really affects your custom code. If you have portal or MVC code in your solution written against a Kentico API like CMS.Membership.UserInfoProvider.GetFullUsers() and Kentico decides to remove that API and instead force you to use CMS.Membership.UserInfoProvider.GetUsersDataWithSettings() your project will error at compile time. By the way, this is a real example. 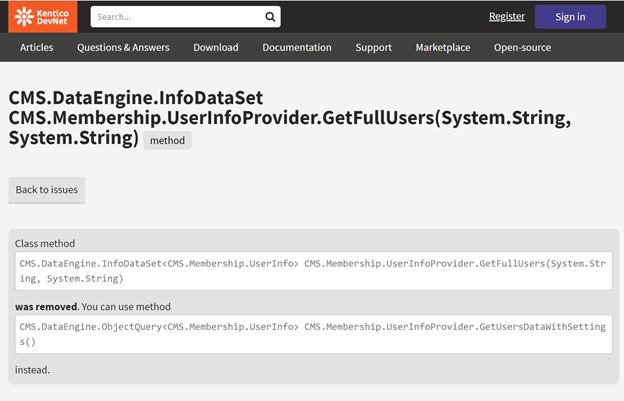 It is up to the site owner or developer to make the correct updates for the newest version of the Kentico API that you are using. Kentico actually published the changes to devnet, which makes it nice to find the answer of where to update your code to. The last time I checked for the v12 release I saw about 700 different API changes in the log. Now you may be using 0 of those original APIs and not have any issues, or 200 of those original APIs and now you have a bit of code refactoring to do. It all depends.

Upgrades also make changes to the how the solution is setup at project code level in visual studio. There is a different project structure in version 10 than there is 12 and so on when it comes to MVC. Version 12 has a unique way of installing the starter site and admin tool in a root folder compared to earlier versions. Also, the project structure has different versions of reference assemblies (dlls). If you have other custom libraries that are compiled against specific versions, you will have to update those as well.

These last few items will change your build process if you are using Continuous Integration (CI). You should be aware of them by now hopefully. Again, this is another reason why upgrades are more than an hour that might not be clear to non-technical users.

Kentico Hotfixes meanwhile are nowhere near the amount of change that a major point version is. The reason for that is the fact that Kentico launches a hotfix a week (almost) to fix and small bugs, or any small third-party dependency changes as stated in their 7 day bug fix guarantee. For instance, a hotfix could include an error in the admin tool when saving site specific roles or global roles, or saving a media library file item to Azure Blog storage. Or a hotfix might resolve the fact that the Twitter API now requires TLS 1.2 instead of TLS 1.0 to connect. Hotfixes are meant for small issues to be resolved only.

Pro Tip: Hotfixes are found at https://devnet.kentico.com/download/hotfixes. The Fixed bugs link is incredibly useful to find out if the issue you are dealing with is resolved in a hotfix or not. You can search for something like “smart” and all Kentico Smart Search issues will show up.

This means the chances of a hotfix breaking things on your Kentico site is less than an upgrade. But it doesn't mean the chances are zero!  In fact, we have been bitten by hotfixes over the years, and are now selective about which hotfixes we apply and for what reason (that sounds like another blog post for the future).

Pro Tip: My advice to our clients is that you don’t want to Hotfix every single week, you also don’t want to never hotfix either. I recommend hotfixing not to the bleeding edge either, unless you need it. For example as of 2/18/19 I would choose hotfixing to 12.0.9 because it has a content staging fix in it and should be stable, but not running 12.0.10 because it is so new.

Kentico does provide a set of tools to make this work a bit easier. I’d like to point them out.

At this point you are probably wondering, at the end of the day, how much does a Kentico MVC Upgrade Cost? My answer truly is… it depends. Sorry there is no automatic number you can use here. But I'll boil it down to a bullet list of what to consider when estimating a Kentico Upgrade.

Bottom line, the answer is, we have done upgrades for as little as about 32 hours of time for simple sites with just a dev and production environment, and as high as 300 hours for large complex sites with lots of integrations and multiple environments. It all depends.

When it comes to hotfixes, the final number that we usually go with is approximately 12 - 16 hours as they are much less effort, but still require the same level of care and user acceptance testing.

I hope that after reading this blog post you have learned a few details on why a Kentico MVC Upgrade / hoftfix does not "just" take a few hours.